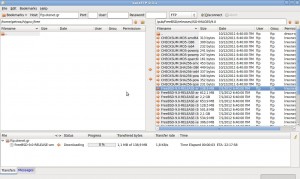 In search of a lightweight graphical FTP Client for Linux, I was found the bareFTP.

It’s lightweith and has a very clean interface. It looks like gFTP, but looks more stable and have better management of UI space (uses tabbed view for messages and transfert progress instead of two boxes). It supports FTP, FTPS, SSH and SFTP tranfers. Also uses GnomeKeyring for secure local storage the passwords of bookmarked ftp sites.

In concertation with the developer, I took the effort of the greek localization of the program. The Greek Language added since the 0.3.10 release (March 23, 2013)